If a zombie apocalypse would happen and all the institutions eventually fail, there is only one place that I would go for a sanctuary. That is the village of Feldheim. Why? For obvious reason. The town is energy self-sufficient, running their own grid, and even supply energy to the national grid. Plus, they have a huge field to grow crops and a farm to raise livestock. Good enough to survive, right?

Now, back to reality.

The CIPSEM EM-42 participants recently had an excursion to the village of Feldheim, City of Treuenbrietzen, in the Brandenburg region. The village of 130 residents is about 60 kilometers southwest of Berlin. The villagers are proud to claim that they are the first energy-independent and the only energy self-sufficient community in Germany and a pioneer in the field of bio energy. This pride was reverberated by Feldheim’s official tour officer, Kathleen Thompson, who enthusiastically presented the facts and figures about the renewable energy undertaking of Feldheim in her powerpoint presentations at the Neue Energien Forum building.

This pride and success was made possible by the visionary entrepreneur and now Managing Director of his own multi-million company Energiequelle GmbH, Dipl. -Ing. Michael Raschemann. When he was still an engineering student in 1993, Engr. Raschemann approached the Mayoress of Feldheim to erect some wind turbines. It gained the approval and support of the city council and in 1995, 4 initial wind turbines began to produce electricity. Today, 55 wind turbines with a total installed capacity of 122.6 MW are sustaining more than enough the electricity need of Feldheim. It is for this reason that the local energy cooperative Feldheim Energie GmbH & Co. KG runned by the Feldheim village representatives, the municipality of Treuenbrietzen, local industry, and Energiequelle GmbH, supply its excess energy to the national grid, thereby helping Germany achieve energy sufficiency, too. 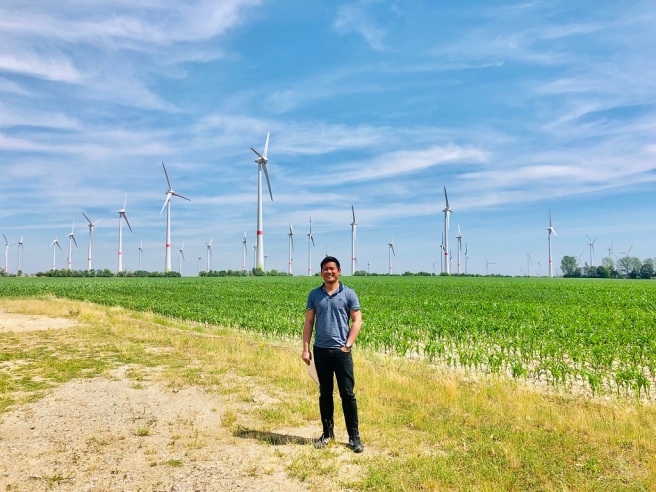 But self-sufficiency is clearly not enough for Feldheim as they have also built additional renewable energy sources from solar, biogas, and biomass in their portfolio. A total of 9,844 solar panels mounted on 284 trackers at the Solar Farm Selterhof produce a total power capacity of 2.25 MWp. A biogas plant with an installed electric power capacity of 526 kW and a biomass heating plant with installed capacities of 300 to 20,000 kW, on the other hand, are also installed within the village compound alongside the fancy painted battery storage building. This battery storage uses the lithium-ion battery with a capacity of 10 MW at an efficiency rate of >85% in storing the energy generated from the wind farm. 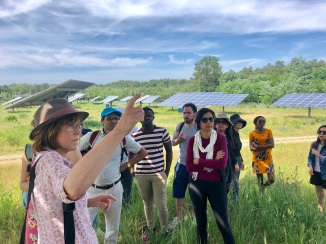 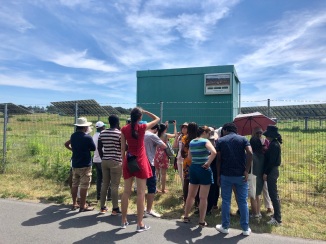 The success of Feldheim in achieving energy self-sufficiency is far from being perfect in the beginning, of course. Financial constraints proved to be an obstacle. But with the combined enabling policies of the Federal State of Brandenburg, the Federal Government of Germany, and the European Union, they have surpassed the trials and achieved what they have envisioned for their community… “a Feldheim that took a step into the future with courage, optimism, and readiness to engage in dialogue. A future not only for Feldheim, but for all. A future without nuclear power, coal, and oil. A future which is not at the cost of later generations”.

If you are curious about how much CO² reduction was made from all these renewable energies, Feldheim estimated a yearly reduction of around 208,000 tons of CO².