After a month of studies in Dresden at CIPSEM, we (EM41) had an opportunity to go to Berlin for a visit to the Ministry for the Environment, Nature Conservation, Building and Nuclear Safety (BMUB) and attending the 3rd German Future Earth Summit. As scheduled, we left Dresden in the early morning of February 7th heading to Berlin by train. As soon as we arrived, on the way to our first stop, we encountered an old piece of the Berlin Wall and the line that used to divide the city. We got to the Ministry of Environment. Ms. Königsberg received us and told us about the history of the house, Berlin and The Wall. She showed us maps and old photos from that time. We did a tour of the building, through the patios and the standing Wall. We proceeded to the conference room where we met with Mr. Contius, head of the division “United Nations, Agenda 2030, Cooperation with Developing and Newly Industrialized Countries” at the German Ministry for the Environment, Nature Conservation, Building and Nuclear Safety (BMUB). 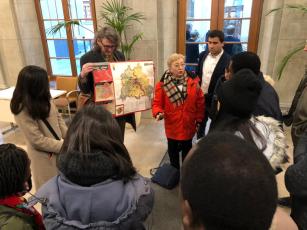 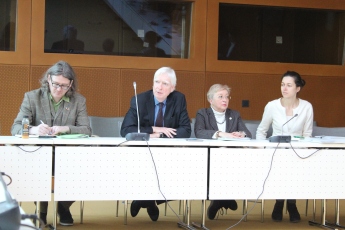 Mr. Contius talked to us about Germany’s Multilateral Work for Sustainable Development and its relevance on the national level. He explained that the main goal of his division involves narrowing the gap between the rich and the poor, and help businesses go green. That way, there will be a change of course in order to achieve as many SDGs (Sustainable Development Goals) as possible by 2030. Germany mainly focuses on 3 issues: energy, agriculture and traffic; through the “5 Ps”: people, planet, prosperity, partnership and peace. After having lunch at the Ministry, we went to the greywater recycling project station at Block 6. Mr. Nolde, manager of the project, explained the history and the overview of his project on how it operates. The facility is a decentralized recycling station, which according to Mr. Nolde is the best way for water treatment and reutilization in order to maximize energy efficiency. In the evening, Dr. Lindner gave us a quick tour around Brandenburger Tor and the Reichstag, on the way to a wonderful dinner at Hopfingerbräu im Palais.

On the following 2 days, we joined the 3rd German Future Earth Summit – From Knowledge to Action at the Umweltforum. This summit provides a platform for researchers, scholars, NGOs, practitioners to discuss and figure out the challenges, especially in science, regarding the agenda 2030 of Sustainable Development. This year, the focus of the Summit was on KANs or Knowledge-Action Networks, in order to build bridges between the scientific community and other stakeholders and decision makers.

During the summit, we were divided into different roundtable discussions and sessions according to our professional and academic expertise and interests. This helped us understand, discuss and share ideas among all attendees. It was a great opportunity for us, EM41 Fellows, to meet many scholars and researchers, and build networks with them for future cooperation.

After the quiet of Vilm, the group plunged into the vivid urban life of Berlin: the first day started with a seminar on sustainable development goals at the Federal Environment Ministry (BMUB) and a guided tour through the ministry. On day 2, climate negotiations at the Ecologic Institute, a visit to ECF Farm, Europe’s largest urban aquaponic farm, as well as a visit to a greywater recycling project were on the schedule.