It’s mostly known that capital city of each country has more options on each sector, as it concentrates governmental and non-governmental institutions. CIPSEM organized a study trip to Berlin between October 20 and 21, 2016 and we, the participants of SC69, could have this opportunity to visit several federal and non-governmental organizations. In addition to this, we could explore Berlin’s historical and cultural sites between courses.
Our first meeting was with Mrs. Königsberg, who took us to discover the nearby surroundings of the BMUB (Federal Ministry for Environment, Nature Conservation, Building and Nuclear Safety), since it is located in an area having historical traces of the border zones of Eastern and Western Berlin. Mrs. Königsberg was very enthusiastic to speak about the situation in Berlin during the 1962-1989 years. Participants were eager to listen and asked questions even though it was cold and cloudy outside in Berlin.

The next meeting was followed after the lunch break, which helped everybody to warm up and restore energy! We were well surprised to discover a small, but important community grey-water recycling center in the down town of Berlin managed by Mr. Nolde. This meeting was concerned to energy and recycling. Mr. Nolde explained all aspects of grey-water recycling in it’s three steps. Personally, I was surprised that there is another view to recycling of water in Germany, as it’s also an energy source!!! Overall, Mr. Nolde explained also water recycling challenges and new water concepts and regulations in Germany. The other discover was that this facility was managed only by one person and it was well automated and organized.

Afterwards we could go back to our hotel by sightseeing Potsdam Square, the Holocaust memorial, Brandenburg Gate, the German Parliament Building – “Bundestag” and the Chancellor’s office.

The second day started with a visit to the German Energy Agency (DENA), where Mr. Schmidt presented this very institution. The expertise, consultancy as well as developing strategy and monitoring of renewable energy sector in Germany.
The final visit was at the German Association of Energy Cooperatives, which is located next to the Brandenburg Gate. The participants could learn projects, tasks and functions of more than 800 cooperatives in the renewable energy sector of Germany. Having finished our visit, we said each other ‘see you again at CIPSEM’, since the majority of participants rested in Berlin or went to other cities such as Amsterdam and Paris for the weekend.

At last, I can say that we were warmly welcomed it was a very helpful visit at each organization during the two-day gateway in Berlin.

By Adedoyin A. Adeleke (Nigeria)

It’s been learning and exciting time at CIPSEM since our course began. The diverse backgrounds of the 21 participants from 19 countries in the course have provided enriching insights on energy profiles (including their cultures) through the country reports. We have also had introductory lectures on renewable energy and energy efficiency which altogether have provided insights on trends, technologies and the policies driving them in Germany.
Then it was time to do some site visits, this time the German Environmental Agency headquarters in Dessau!  The about two and half hours’ journey by train provided opportunity to pass through other cities of Germany as well as villages. We realized that its global leadership in renewable energy, Germany also has fertile and expanse of land for agriculture.
On arrival at the Agency, we were taken on a guided tour round the building. What initially appeared to be a demonstration of architectural and artistic expertise would soon become a blend of arts and architectural design in a “model green building”. Our guide provided detailed explanations on the various designs and parts of the building as it relates to renewable energy and energy efficiency. 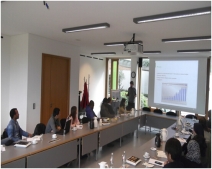 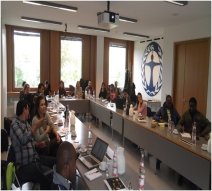 From the Agency, we proceeded to the world famous home of harmony of arts and craft, the Bauhaus in Dessau! We had another guided tour of the building and learned of its legacy in architecture since the 20th century. The 90-year old building which was a masterpiece in the 20th century architecture was designed in 1925 by Walter Gropius, a professor and an architect. The building was was unique with its glass wall, flat roofs and the no-main view design of the building which were peculiar at the time. The Bauhaus appears to be more than design but also a philosophy that pushed design on a new course: the Bauhaus provides an interface between User Experience, Sustainability and Innovation in building design.  From the Bauhaus, we retired to the hotel for dinner and night rest, courtesy of CIPSEM.
Next day, we had five insightful presentations at the German Environmental Agency (UBA). First was an introduction to the operation of the Agency.  It was exciting to learn of the reason for the location of the headquarter office of the UBA in Dessau instead of Berlin, the capital. We learned that all second place government institutions were asked to move to the interior to facilitate infrastructural development in 2004. Among other responsibilities, the agency supports Federal ministry for the environment, Nature conservation Building, and Nuclear safety (BMUB) and the Federal Ministry of Economy and Energy (BMWi)  “by providing scientific knowledge on energy questions and issues such as renewable energy”, collecting data, educating the public, implementing statutory provisions, among others. Thanks to Dr. Benno Hain for his presentation.
In his second presentation, Dr. Hain discussed policy and the institutional framework for Climate mitigation strategies and scenarios in Germany. He introduced the three levels of policy drivers for climate change in Germany: national (Energy Concept of Germany), regional (Climate and Energy Package of the EU28) and the global (International Climate Policy, UNFCCC). Very insightful!
Next was a presentation on the various bioenergy applications and their roles in sustainable development.  Jan Seven emphasized that though the use of bioenergy (traditional) is an ancient practice, their inefficient use results in resource depletion, air pollution and labour shortage.  He also itemized the risks and opportunities associated with modern bioenergy. According to him, averting the risks while taking advantage of the opportunities requires changes in current practices and strategies. Further, he discussed UBA’s activities for sustainable bioenergy development and support for the Global Bioenergy Partnership (GBEP).
Max Werlein also made a presentation on the “Energy Transition in Germany”.  He discussed the concept “Energiewende”, targets and the three policy goals driving it: economic efficiency, security of supply, and environmental compatibility.  After the lunch break, we had the last presentation by Jens Schuberth: “Policies for energy saving”.  Jens discussed the prospects and challenges of sustainable use of energy and energy efficient products. His lecture also provided insights on policies and strategies for promoting the construction of energy efficient buildings in Germany.
Overall, the excursion provided insights on the German energy system, targets and the policies drivers. Thanks to CIPSEM for facilitating the visit and special thanks for Andre for leading us on the trip!

An important part of our short course on renewable energy sources and energy efficiency has been our visit to SolarWorld Freiberg.
All participants made good use of this opportunity to learn about the solar value chain including recycling of photovoltaic modules. We got to know current types and characteristics of PV-systems.
We also discovered what makes a good quality photovoltaic system. The wide range of short and long term benefits of high quality standards came as a surprise to some of us and illustrated well that lower up-front costs don’t necessarily lead to lower total cost.

Thanks to Mr. Handke for enthusiastically sharing his knowledge in an introductory talk, a guided tour, and extensive Q&A sessions. 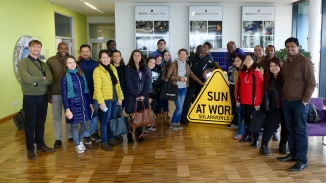 Before our tour through the solar wafer production plant.

Some insights into the different types of modules before entering the module production facility.

After fortifying ourselves at the student restaurant we went on to explore mining history of the area and the natural beauty of minerals in the Terra Mineralia exhibition.

With new energy after the lunch break.

From sand to silicon for wafer production: this processing chain is also addressed at Terra Mineralia.

Other exhibits are stunning in different ways.

For example this fluorite on quartz.

In support of the sustainable development goals, our courses are designed to prepare the participants for their tasks of environment-related planning, coordination and management within ministries, agencies and local governments as well as NGOs of their home countries. Participants are expected to have several years of course relevant professional experience and to be nominated by their institution in a developing or emerging country.